Thank you for being a sponsor of MKC and ARC’s programs to help Animal Rescue.

Two Thumbs Wildlife Sanctuary was one of the most important sanctuaries in the area, a safe haven for rescued wildlife in Southern NSW

Tragically, on Jan 21st a C130 Hercules doing water bombing to save the sanctuary and surrounding areas, crashed near the sanctuary, resulting in the loss of three brave men. Sadly, the sanctuary, only just recovering from a previous fire, was wiped out. These animal’s home, and their lives, were lost., along with the home of their dedicated protector, James.

You can read about this disaster here.

This is not just one sanctuary, but a zone for many of the local sanctuaries to safely release. This is important. 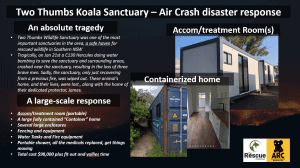 This is our response

The ARC, Rescue Collective, MKC and our supporters are going to rebuild the site quickly. Working with local teams, we will put in place

The total cost for this fit out is $120,000 plus fit out and volunteer time. We will be updating this project log as it occurs.

The sanctuaries also provided enclosures and other facilities for wildlife rehabilitation and a base for scientific research. Local wildlife rescue groups including Wildcare NSW, LAOKO (Looking After Our Kosciuszko Orphans) and NARG (Native Animal Rescue Group) have used the sanctuaries as a safe release site.

They are also home to a number of other threatened species, including greater gliders, squirrel gliders, Rosenberg’s goanna and the quoll.

Use this form to find things you need on this site